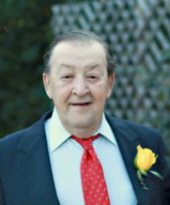 Bill Krizmanich passed away on Thursday, May 16, 2013. Born on August 21st, 1935 Bill was a lifelong resident of Etna, PA. Bill was married to Patricia (Ewing) Krizmanich and now joins her for eternity. Bill and Patty are survived by their four children Bill, Nick, Diane and Michael. He was the son of the late John and Anna (Bursich) Krizmanich; brother of Betty Perrotte (John) and the late John Krizmanich; grandfather of 10 grandchildren and 2 great grandchildren. He enjoyed golf, Steelers football and the new Pittsburgh casino. He was active in his community and a good neighbor, always willing to help those in need. Bill will be lovingly remembered as a dedicated father, grandfather and husband.

Celebrate Mr. Krizmanich’s life with his family on Monday from 12-8 PM at the Perman Funeral Home and Cremation Services, Inc., 923 Saxonburg Blvd at Rt. 8, Shaler Twp. Mass of Christian Burial will be at All Saints Church, Etna, on Tuesday at 10AM. Leave condolences at www.permanfuneralhome.com.
To order memorial trees or send flowers to the family in memory of William R. Krizmanich, please visit our flower store.