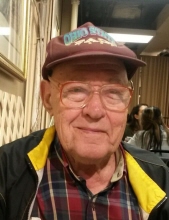 Age 94, of Waynesburg, on Monday, December 27, 2021 at WHS Greene. He was born in Pittsburgh on 9/17/1927 to the late Raymond and Helen Janicka Dunkle. Mr. Dunkle served in the US Marine Corps from 11/20/1945-9/3/1948. He married Iris Lewis on 9/24/1949. She passed away on 7/11/2018. Mr. Dunkle worked for Cooper Bessemer in Grove City then for Mon-Con RR in Pittsburgh. He moved to Waynesburg in 2002 to be close to his daughter who was his caretaker for the last three years. He lived in his own apartment until he fell on 6/21/2021. He resided at Rolling Meadows Health and Rehab until his death. Wilbert enjoyed hunting and fishing his entire life well into his 80s. He was also a great fan of the Pittsburgh Steelers. Mr. Dunkle was the oldest and last of his family. He was preceded in death by his siblings- Harry, Martha and Delores. Surviving are his children- Wilbert Dunkle (Darlene), Sherry Brown (Terry); also four grandchildren and six great-grandchildren. He will be sorely missed by his family.

Interment was Private. Arrangements made by PERMAN FUNERAL HOME AND CREMATION SERVICES, INC., Shaler Twp.
To order memorial trees or send flowers to the family in memory of Wilbert E. Dunkle, please visit our flower store.