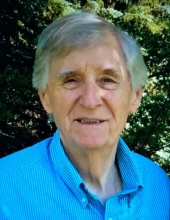 Age 85, of Glenshaw passed away peacefully into the arms of the Lord Tuesday, December 15, 2020 at Passavant Hospital in McCandless Township.

Born 1935 in Pittsburgh, Warren was the son of Anna (Ahearn) and Wencel Nath. He was lovingly raised by his mother and his uncles after his father was killed in action in France in 1945. Warren, himself, served in the U.S. Army as a tank driver during peace time.

Warren had a life-long career as a piping draftsman working on many large industrial projects across the country. He spent a majority of his career working for and retired from R.T. Patterson Engineering in Pittsburgh.

Warren devotion to his faith was a significant part of his life; he led by example. He was a life-long active member of St. Mary of the Assumption Church in Glenshaw. He served as a Eucharistic Minister for the church for many decades. He and Arlene volunteered every chance he could. Throughout his retirement years, he was active in AARP which included travelling to many countries with his wife Arlene. Warren also enjoyed his luncheons at the local community center in Hampton.

He loved hunting, camping with his family, maintaining his vehicles and the un-ending projects around the house, most of which he conjured up so that he had something to do. He loved watching the Pittsburgh Steelers and planned his weekends around the "Big" game. Most of all he was a devoted husband and father who endlessly cared for his children and their needs.

Warren is preceded in death by his wife of 47-years Arlene (Ciancio) who passed in 2010. After the death of his wife, he found a faithful friendship of 8 years with Diana Bahorich-Bell who also cared for him in his last months. He is survived by daughters Danielle (Bauer) and Ann Samarin (Robert), sons John (Kim) and Stephen and was a loving Pap Pap to Lindsey, Rachel, Ian and Bobby.

Out of caution for the health of all, a private viewing and ceremony will be held.