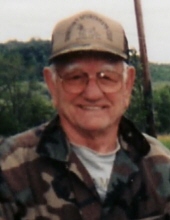 Walter Francis Lewandowski, son of the late Walter and Helen Lewandowski, was born on May 7th, 1932 in McClure, Pennsylvania. He was one of ten children.

Walter was united in holy matrimony to Edith (Giobbi) on November 22nd, 1956. They had two daughters, Janeanne (1959) and Susan (1964), with four grandchildren and one great-grandchild.

As an avid hunter and fisherman, Walter was a kind and quiet man who loved to spend time outdoors, often finding peace in the forest and in nature. He loved buck season and fishing trips on his boat with his wife Edith. He happily served as President of the Dunbar Sportsman Club.

Walter was a man of deep faith and devotion, serving faithfully as an usher for St. Aloysius Roman Catholic Church and never missing his nightly prayers. He was a proud fourth degree member of Knights of Columbus.

He served as a MP in the Korean War in which he received a United Nations Korean Service Medal and a National Defense service medal. Walter worked for 35 years for Wetterau Corp, spending many years on the road delivering goods for Fox Grocery in Pennsylvania and neighboring states.

Later in life, his love for the outdoors and his family came together as Walter worked with his children and grandchildren to set up operations at Fadeaway Farm in Butler County. He volunteered his vigorous strength and keen talents for landscaping and fixing farm equipment. He was voted Employee of the Month for fifteen consecutive years. The honor will now be retired.

There will be no viewing but you may extend sympathies to:

The family wishes to extend our gratitude to the nurses, aides, and entire medical staff at St. Barnabas Nursing Home who went above and beyond to give both Walter and his family consolation, comfort, and peace.

Services will be held at a later date. Arrangements made by Perman Funeral Home 923 Saxonburg Blvd. at Rt. 8, Shaler Twp. The family respectfully suggests donations be made to St. Vincent de Paul Society, PO Box 375, Connellsville PA 15425.
To order memorial trees or send flowers to the family in memory of Walter F. Lewandowski, please visit our flower store.