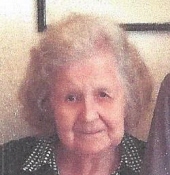 Of Shaler Twp., on Friday, February 26, 2016, Mrs. Benko was the beloved wife of the late John Benko; mother of Sharon Yoder (David) of Scottdale PA, John M. Benko (Mary) of Irwin, Kenneth Benko (Ann) of Hoover AL and the late Richard, Brian and Alan Benko; survived by 10 grandchildren and 11 great-grandchildren; preceded in death by her parents, 4 sisters and a brother.
Celebrate Mrs. Benkos life on Wednesday from 9 to 10 AM at Perman Funeral Home and Cremation Services, Inc., 923 Saxonburg Blvd. at Rt. 8, Shaler Twp followed by a Mass of Christian Burial at St. Mary of the Assumption Church, Glenshaw, at 11:30 AM.
To order memorial trees or send flowers to the family in memory of Virginia (Wojciak) Benko, please visit our flower store.