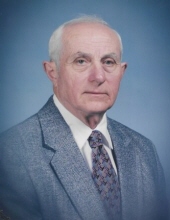 Of Shaler, passed away peacefully at his home, on January 19, 2022. He was 96 years of age. He is survived by his loving wife of 67 years, Barbara (Guidish) and his seven children, Diane Guthrie, Robert (Sandy), Janet (Chris) Lochner, Stephen, Theresa (Michael) Somerhalder, Mary and Joseph. He was a fun and loving grandfather to his 11 grandchildren, Christie (Dane), David (Cyntia), Joylyn, Serena, Bobbi, Erin (Bryant), Alexander, Michael, Eric (Emily), Eli and Anna, and a growing generation of 5 great-grandchildren. Born on December 10, 1925, he was raised in Republic, PA. His first time away from home was during World War II, when he was drafted into the US Army, at the age of 18. In July of 1944, he began his 3 months of infantry training in Fort McClellan, Alabama. By December of that same year, he was involved in the Battle of the Bulge. While in the US Army, he served in the 83rd Infantry and was awarded the combat infantryman's badge, the good conduct medal, a bronze star, and badges for his part in three of the five battles in Europe: Ardennes (Battle of the Bulge), Rhineland and Central Europe. At the end of the war, he spent 12 months in the Occupation Forces before returning home. Upon his return home, he spent time back in his hometown with his family before moving to Pittsburgh, where he began a job working for US Plywood, which is where he met his beautiful wife. He next worked for Paul Lumber, where he would work until his retirement. In addition to his full-time jobs, he kept himself busy with extra jobs and volunteer work that utilized his natural knack for math and eye for detail. He was very involved and invested in his church, the VFW, St. Vincent de Paul and the VA. He also had served as a volunteer fireman for Sharpshill Volunteer Fire Department. He kept active with projects around the house and yard and belonged to a bowling league and softball team much longer than any of his family thought he should, but he loved it and it kept him young. He was an avid sports fan and could give you the most random of stats of any team. He loved the Pittsburgh sports teams and taught his family to do the same, especially the Pirates (through thick and thin!). It is with heavy hearts that we say goodbye to this beautiful, inside and out, husband, father, grandfather and great grandfather.

Celebrate Mr. Bukovacs life with his family on Sunday from 2-4 and 6-8 PM at Perman Funeral Home, 923 Saxonburg Boulevard at Rt. 8, Shaler Twp. Mass of Christian Burial will be held on Monday, at 10:00 AM at Christ the King Parish, St. Joseph Church, 342 Dorseyville Road, Pittsburgh, PA 15215. Masks required at Visitation and Mass. Interment will follow at the National Cemetery of the Alleghenies. Contributions, in lieu of flowers, may be made to St. Vincent de Paul Society.
To order memorial trees or send flowers to the family in memory of Stephen B. Bukovac, please visit our flower store.