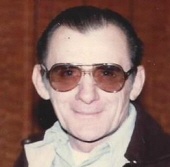 Of Indiana Twp., on Wednesday, May 4, 2016, Rudy was the beloved husband of the late Esther L. Hayson Habajec; father of Stephanie Veselic (the late James) and Mark Habajec (the late Debra); brother of Mary Poslusney and the late William Habajec; beloved grandfather (Boom) of Christine Veselic. Rudy was a decorated WWII Veteran and a proud member of the American Legion. He was an avid musky fisherman.
Celebrate Rudys life with his family on Monday from 2-4 PM and 6-8 PM at Perman Funeral Home and Cremation Services, Inc., 923 Saxonburg Blvd. at Rt. 8, Shaler Twp. The family respectfully requests donations be made to the Pennsylvania American Legion, PO Box 2324, Harrisburg, PA 17105.
Charitable donations may be made to:
American Legion- Pennsylvania
PO Box 2324, Harrisburg PA 17105
Tel: 1-717-730-9100
Web: http://pa-legion.com/
To order memorial trees or send flowers to the family in memory of Rudolph G. Rudy Habajec, please visit our flower store.