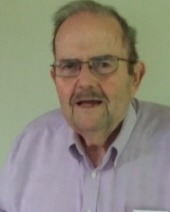 Age 82, of Indiana Twp., passed into the Glory of God on Friday, January 7, 2022, at St. Margaret Hospital after post-surgery complications. He was born July 15, 1939 to the late Walter and Eleanor Zufall in Sharpsburg, PA. A 1957 graduate of Sharpsburg High School, he married his loving wife of 62 years Esther Domian Zufall. A lifelong resident of Indiana Twp., Bob raised his five children- James Zufall (Maria), Matthew Zufall, Joel Zufall (Susan), Maria Zufall (Bill Chan), and Rebecca Zufall (Sam Ortallono). He also leaves behind his 10 grandchildren- Robert, Aaron, Joy, Madison, and Mallory Zufall, Zoe, Zachary and Abby Chan, Oz and Max Ortallono. Mr. Zufall was a lifelong member of Trinity United Church of Christ, Dorseyville. He worked for 53 years at Globe Electric Company where he was an electrical and overhead crane technician. He was a proud member of the Ford Crown Victoria Association and treasured his 1955 Ford. He was "Papa Zuf" to the Fox Chapel Marching Band throughout the 1980s where three of his children were active band members. He served on several church-based boards and committees as well as a number of other organizations logging thousands of hours of volunteer in his life.

Celebrate Mr. Zufalls life with his family on Monday from 1-4 PM 5-8 PM at PERMAN FUNERAL HOME AND CREMATION SERVICES, INC., 923 Saxonburg Blvd., Shaler Twp. A Funeral Service will be held at Trinity United Church of Christ, Dorseyville on Tuesday at 10:30 AM. The family respectfully suggests donations be made to Trinity United Church of Christ, 3712 Saxonburg Blvd., Pittsburgh PA 15238.
To order memorial trees or send flowers to the family in memory of Robert Matthew Zufall, please visit our flower store.