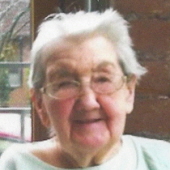 Of Point Breeze, on Thursday, January 1, 2015, Scotty was the daughter of the late Morrison and Janet Mellville Izatt; preceded in death by 10 brothers and sisters; aunt of Edna McGilvary, Joyce Fleming (Duncan) and Janis McCulloch (John), all of the UK, Nancy Shaw and Margaret Donohue (John), both of Ontario Canada; great-aunt of Diane, Lorraine, Stuart, William, Harry Steven, John; also survived by great-great nieces and nephews. Scotty was a retired Insurance Agent with Dave Carnahan and Associates. She was very proud of her Scottish heritage.

A Memorial Service will be held on Saturday, January 17, 2015 at East Liberty Presbyterian Church at 10:30 AM. Arrangements made by Perman Funeral Home and Cremation Services, Inc., 923 Saxonburg Blvd. at Rt. 8, Shaler Twp.
To order memorial trees or send flowers to the family in memory of Morrison B. Scotty Izatt, please visit our flower store.