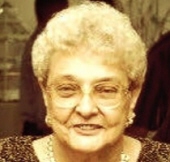 Of Shaler Twp., on Tuesday, October 6, 2015, Mrs. Pappas was the beloved wife of George H. Pappas; mother of Yvonne Martin (Joseph) of Butler, George “Dutch” Pappas of Shaler Twp., David Pappas (Maryann) of New Kensington, Mark Pappas (Lori) of Geneva, OH; daughter of the late Arthur and Madeline Ritenbaugh; she was one of 16 children; also 9 grandchildren and 6 great-grandchildren.

Celebrate Mrs. Pappas’ life with her family on Thursday from 2-8 PM at Perman Funeral Home and Cremation Services, Inc., 923 Saxonburg Blvd. at Rt. 8, Shaler Twp. where services will be held Friday at 10 AM.
To order memorial trees or send flowers to the family in memory of Joye S. (Ritenbaugh) Pappas, please visit our flower store.