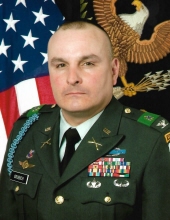 Formerly of Pittsburgh, passed away peacefully on his farm on February 23, 2022. Joe was the beloved husband of Deborah Grubich; father of Lisa Compton (Matthew), Nicholas Grubich (Rachel); step-father of Paige Anderson, Bridget Anderson; son of the late Joseph J. and Anna Grubich; brother of Kathleen Chuckro (David), and the late Barbara Kacin (Donald), Michael Grubich; grandfather of Edward “Teddy” Compton; nephew of Edward Grubich; also survived by nieces, nephews and cousins who affectionately referred to him as “The Colonel”.

Joe was a highly decorated combat veteran who served in the United States Army for 30 years. He was deployed numerous times, including Afghanistan, Iraq, Kuwait and Jordan. Family was important to Joe, and he loved spending time with his children and grandson. He also enjoyed the family’s annual camping trip. Joe had several hobbies but what he enjoyed most was spending time on his farm with his wife and their many animals.

Celebrate Joe’s life with his family on Saturday, May 14th at 10:30 AM at St. Nicholas Cemetery, 2114 Lonsdale St., Pittsburgh PA 15209. Arrangements made by at PERMAN FUNERAL HOME AND CREMATION SERVICES, INC., Shaler Twp. The family respectfully suggests donations be made to the Wounded Warrior Project, 600 River Ave, Ste 400, PGH PA 15212.

To order memorial trees or send flowers to the family in memory of Joseph Mark Grubich, please visit our flower store.