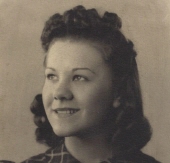 At age 93, formerly of Glenshaw and Etna, on Friday, April 29, 2016, Mrs. Habegger passed away with her family by her side. Mrs. Habegger was the beloved wife of the late Frederick Habegger Jr.; cherished mother of Elane McNabb (Joseph Hashim) of Pittsfield MA and Karen Sisco (David Mounts) of Glenshaw; daughter of the late Charles and Veronica Novotny Towick; sister of the late Helen Wachter and Veronica Reight; grandmother of David McNabb, Galen Sisco, and Audra Sisco-DeLallo (Anthony); great-grandmother of Devin McNabb, Braden McNabb, Cooper Sisco, Avery Sisco, Dominic and Nico DeLallo; also survived by nieces and nephews. Mrs. Habegger was a secretary for Architect Vincent Mannella, a full-time mother, and before her retirement, a cook for Eat nPark in Glenshaw. The family would like to acknowledge the most wonderful and compassionate care from the 3rd floor staff at Manor Care in Bethel Park.
Services and Interment will be private at a later date. Arrangements made by Perman Funeral Home and Cremation Services, Inc., 923 Saxonburg Blvd. at Rt. 8, Shaler Twp. In memory of Ireen do something special for someone today.
To order memorial trees or send flowers to the family in memory of Ireen Penny (Towick) Habegger, please visit our flower store.