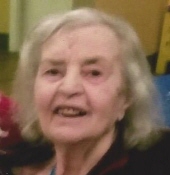 Of Shaler Twp., on Sunday, January 21, 2018, Mrs. Nadalin was the beloved wife of the late Cesare Nadalin; mother of the late Grace Vaccari; daughter of the late Bortolo and Madeline DalDosso; also survived by a brother, a sister, nieces and nephews
Celebrate Mrs. Nadalins life with her family at a Mass of Christian Burial at St. Mary of the Assumption Church, Glenshaw on Wednesday at 10 AM. Family respectfully suggests donation to the American Cancer Society, 320 Bilmar Dr., Pittsburgh PA 15205. Arrangements by Perman Funeral Home and Cremation Services, Inc., 923 Saxonburg Blvd at Rt. 8, Shaler Twp.
To order memorial trees or send flowers to the family in memory of Gina (DalDosso) Nadalin, please visit our flower store.