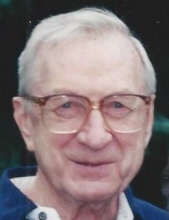 Age 99, died peacefully on January 25, 2019; Frank can best be described as a Renaissance mana person with many talents and knowledge. He was an athlete, a poet, a writer, a dancer, a composer, an administrator, a husband, a father, a grandfather, and a great grandfather.

Frank was born on December 18, 1919 to Adam and Francis Czak. He shared his home on Polish Hill with his siblings: Helen, Stanley, Esther, Francis, Laura, and Walter. Frank attended Immaculate Heart of Mary elementary school and Schenley high school where he was captain of the football and baseball teams and vice president of his senior class.

In April 1941, Frank married Dorothy Walls. Less than two years later, in January of 1943, he volunteered to serve in the army. He was assigned to the signal corps in India. After the war, he and Dorothy settled down in Sharpsburg where he started to work for the post office, and they had their only child, Jane.

In the 60s and 70s, Frank and Dorothy moved to OHara township, and Frank was consistently promoted until he was the supervisor of the Penn Hill post office which, at the time, was the largest branch in Pittsburgh.

In 1981, Frank retired. He ended up being retired longer than he worked. In retirement, Frank enjoyed golfing and dancing. He excelled at ballroom and line dancing. He and Dorothy became seasoned travelers. They visited Hawaii, England, Scotland, Ireland, France, Italy, Germany, Africa, and they traveled extensively throughout the US. Frank focused his creative energies writing poems (he had one published in the Readers Digest), short stories, and musicals. He wrote and directed several musicals presented by the St. Josephs senior group in OHara. Also, Frank loved working on his computer. He word-processed much of his daughter Janes, PhD dissertation work. He wrote and distributed a family newsletter and designed and printed his own original Christmas cards.

Of all the things Frank accomplished and enjoyed in life nothing brought him more pleasure, joy, and contentment than his marriage to Dorothy. They were married 76 years, and in that time their love and devotion for each other never diminished.

Everyone who knew Frank would agree he was a one-of-a-kind guy. He was lucky in love and in life and blessed with a wonderful family, many friends, interesting hobbies and skills, and a long and healthy life.

Visitation will be on Wednesday from 2:00 PM to 8:00 PM at Perman Funeral Home, 923 Saxonburg Boulevard, Pittsburgh, PA 15223. Mass will be on Thursday at 10:00 AM at St. Joseph Church, 342 Dorseyville Road, Pittsburgh, PA 15215.
To order memorial trees or send flowers to the family in memory of Frank Czak, please visit our flower store.