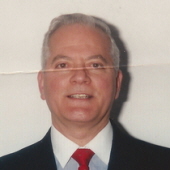 Of Punxsutawney, on Thursday, April 2, 2015, Mr. Molinaro was the beloved father of Mark F. Molinaro (Allison) of Raleigh NC and Cindy Patti (Joe) of Alpharetta GA; son of the late Joseph and Louise Palyor Molinaro; brother of Virginia Lukehart (Richard) of Pittsburgh and Marlene Scarantine (late William) of Niagara Falls NY; grandfather of Celyn, Maren and Linnea Molinaro and Alex and Joseph Patti. Francis served his country for 30 years in the US Air Force as Chief Master Sergeant. He had numerous, interesting posts including Japan, Sweden, Germany, Austria and Cairo, Egypt. Stockholm and Cairo were his favorite postings. He retired to Punxsutawney where he was actively involved in the community through the School Board, Library and other organizations. He had many friends and especially valued his relationships with Linda Ricardo and Boo Lorenzo. Francis loved and was so proud of his children and grandchildren.

Celebrate Francis’ life with his family at a Memorial Service will be held on Monday, April 6, 2015 at SS Cosmas & Damian Church, Punxsutawney, at 11:00 AM with Msgr. Joseph J. Riccardo presiding. Arrangements made by Perman Funeral Home and Cremation Services, Inc., 923 Saxonburg Blvd. at Rt. 8, Pittsburgh. The family respectfully suggests donations to the Salvation Army, 229 W Mahoning St, Punxsutawney, PA 15767.

Mr. Molinaro will be buried with full Air Force military honors at Arlington National Cemetery, Arlington Virginia on Wednesday, July 29, 2015 at 1:00 PM. Attendees are requested to be at the Administration Building one hour prior to Military Services.
To order memorial trees or send flowers to the family in memory of Francis J. Molinaro, please visit our flower store.