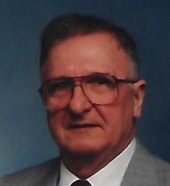 The son of Felix Biedrzycki and Agnes Metz, Eugene grew up in their family-owned butcher shop on Polish Hill with his brother John and sister Loretta. After serving in the US Air Force during WWII, he met his wife of 72 years, Florence Kaminski of Lawrenceville. He was a hard worker who loved to make jokes and was always ready to throw a party. He enjoyed playing pinochle and working on friends and familys automobiles in his garage. He loved to pester and pamper his grandchildren.

Celebrate Mr. Biedrzyckis life with his family on Friday from 2-4 PM and 6-8 PM at Perman Funeral Home 923 Saxonburg Blvd. at Rt. 8, Shaler Twp. Mass of Christian Burial at St. Mary of the Assumption Church, Glenshaw on Saturday at 9:30 AM. The family respectfully suggests donations be made to the scholarship fund at Blessed Trinity Academy, 2510 Middle Road, Glenshaw, PA 15116.
To order memorial trees or send flowers to the family in memory of Eugene J. Biedrzycki, please visit our flower store.