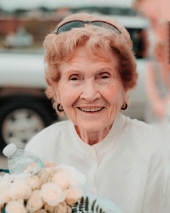 Elsa (Hahn) was born in May, 1937 in Germany. She immigrated to the USA from Langenselbold, a small village northeast of Frankfurt, when she was 17 years old. She left her two brothers and parents in Germany but would be welcomed by two sisters who already had immigrated to Pittsburgh. She self-taught English and found employment at the H.J. Heinz company, where she met her future husband, Charles (Meyer), while working together on the "pickling line". Elsa and Charles married in June 1957 and just celebrated their 64th wedding anniversary. Elsa was a genuinely good soul from the time she was little until her passing. She simply was a contributor to life. She positively impacted everyone she met because of her welcoming personality, pleasant demeanor, and willingness to help anyone at any time with anything. Hard work, healthy eating/cooking, and constant physical activity were her cornerstones. She was a cancer survivor and walked the "Relay for Life" for many years for others that had been afflicted. Many will also remember her walking throughout the neighborhood and at the local school track. Elsa gave a significant portion of her time to the church for cleaning, ironing priests garments, decorating, and being a Eucharistic minister - taking communion to those that could not attend Mass. Throughout her life, she cleaned homes and performed baby-sitting duties, in which she quickly turned into "one of the family" for many of those she worked. In several instances, that was a steppingstone to her being intertwined into those families lives. She continued to work for many of those families for decades. She became a true member of their family where she witnessed the first days of school, recitals, sports events, graduations, marriages, and a new generation of children. Throughout all this time given to others, she had ample time for her family and was truly the best wife and mother that anyone could hope to have. As a mother she was multifaceted: raised in war time Germany she experienced many things most of us will never see which instilled her solid work ethic and toughness, but also developed an equally soft side tempered with gentleness, caring and love for both animals and people. She was extremely neat, clean, organized, and meticulous. She was a proud grandmother who adored her grandchildren (and great grandchild) and was so pleased that she was able to see her youngest grandchild graduate from high school in June. Even throughout her dementia struggles, she made friends with those she came to know and positively impacted many of the nursing staff and residents. She taught her children to be independent, not to shy away from hard work, continuously educate, and be happy with themselves. But most importantly, she taught by example; example of the Golden Rule: "To treat others as you wish to be treated". She was a beautiful, gentle, generous, kind soul that will be missed beyond words. Her legacy will live on with all those whose heart she has touched. She always said that she did not want flowers at her funeral and to give them to her when she could appreciate their beauty and fragrance.

Celebrate Mrs. Meyers life with her family at a Mass of Christian Burial on Wednesday at 11 AM at Our Lady of Perpetual Help Parish, St. Mary of the Assumption Church, Glenshaw. For those unable to attend Mass, please watch the livestream with the link below. Arrangements made by PERMAN FUNERAL HOME AND CREMATION SERVICES, INC., Shaler Twp. So in lieu of flowers, she would want you to give someone else these flowers and continue these acts of kindness.

https://www.olphpgh.org/mass-replay
To order memorial trees or send flowers to the family in memory of Elsa (Hahn) Meyer, please visit our flower store.