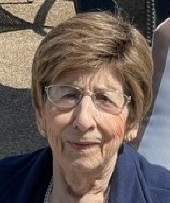 Edith Lewandowski, daughter of the late Anthony and Vicenza (Jane) Giobbi was born on August 10th, 1929, in Dunbar, Pennsylvania. She was a twin sister and one of eight children.

She and her late husband Walter Lewandowski were united in holy matrimony on November 22nd, 1956. They had two daughters, Janeanne (1959) and Susan (1963), with four grandchildren and one great-grandchild named in her honor, Edie.

A loving homemaker, Edith treasured the many family parties and picnics she hosted with an abundance of food, companionship, and the occasional ball game. As a talented cook and baker, Edith shared her gifts selflessly and no one ever left her home without having a slice of cake, apple pie, or a take-home bag full of pepperoni rolls.

Sharing in Walters love of fishing, she enjoyed boat rides and cooking whatever they caught. Her late twin sister Ida Mascarelli, was an honored kinship in her life and they often spent time together listening to baseball games, playing cards, and sharing in the joys of their families.

Edith was a woman of devoted faith and frequently acknowledged her blessings. She was a member of St. Aloysius Church her entire life, as well as a member of the Altar Rosary Society, and the St. Vincent De Paul Society.

Edith celebrated her family and lifelong friendships by expressing her deep gratitude to the wonderful people who filled her life with love. Many of her cherished memories were shared with her loving niece Mary Jane DAmico and her husband Don, nephew James Gambone and his wife Patty, and late nephew the Sullivan Gambone and his wife Kathy. She had a strong bond with her sister-in-law Pauline Giobbi, and her son Anthony; their companionship enriched both of their lives. She had lifelong friendships with neighbors in in Dunbar Township, fellow church goers and community members. Edith found genuine joy in celebrating good news for all their growing families and felt blessed to be in their lives.

Left to honor her memory are her children and grandchildren who brought her so much joy and happiness; Daughter, Janeanne Krizner and husband Robert; Daughter, Susan Wilson; Grandchildren, Amanda (Krizner) Ruane, Abby Krizner Madia, Annie (Wilson) Carlini, and Andrew Wilson; Great-Grandchild, Edith Madia. In addition to her parents, she was preceded in death by three brothers and four sisters as the last surviving member of her immediate family. Brothers Alex, Louis, and Nick Giobbi; Sisters, Carrie Gambone, Rose Farris, Anne Gambone, and her twin sister Ida Mascarelli. She is also preceded in death by her devoted loving husband, Walter Francis Lewandowski.

The family would like to extend their gratitude to the caring and compassionate friends she made while a resident of St. Barnabas. They also want to thank the real-life angels of Gateway Hospice, especially Becky, who treated her with dignity and assisted in providing as much comfort as possible.

Mrs. Lewandowskis celebration of life with her family has been post-poned due to health issues. Please look forward to coming announcements of when her Mass of Christian Burial at St. Catherine of Sweden Church, Saints Martha and Mary Parish will be at a later time. She will be interred at the National Cemetery of the Alleghenies to rest with her husband, Walter. The family respectfully suggests donations be made to St. Vincent DePaul Society in honor of Edith and Walter Lewandowski. They are now together, sharing in their faith and watching over their family who adored them both so deeply. Arrangements made by PERMAN FUNERAL HOME AND CREMATION SERVICES, INC., 923 Saxonburg Blvd., Shaler Twp.
To order memorial trees or send flowers to the family in memory of Edith Lewandowski, please visit our flower store.