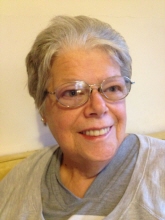 Doris Odhner Delaney passed into the spiritual world at the age of 81 on November 3, 2021, in her home in Pittsburgh from a heart attack. Doris was born on May 22, 1940 in Bryn Athyn, PA, to Hugo Lj. Odhner and Constance Waelchli Odhner, the tenth of eleven children. She lived her childhood at Glenhurst, of which she has many fond memories. She graduated high school from the Academy of the New Church. She was married to Reginald F. Delaney for 10 years and then raised four children alone. She received an Associates degree but never engaged in a writing career as she would have wished. Instead, she was drawn to environmental activism and human rights protection through the organization PROTECT which she was fundamental in creating. After moving to Pittsburgh in her later years, she became involved in helping children learn to read and was known as Grandma to many children at the Pittsburgh New Church School where she volunteered many hours. Her religious beliefs were very important to Doris and she remained a devoted member of the General Church of the New Jerusalem all her life. She is preceded by all but two of her siblings and her great-grand son, Joshy. She is survived by her children Pegene K. Pitcairn (Brant Pitcairn), Gabrielle D. Uber (Robert Uber), Julie L. Cook (L. Michael Cook), and Bryce C. Delaney as well as eight grand children and five great-grand children. A memorial service will be held at The Pittsburgh New Church at 299 LeRoi Rd. in Pittsburgh at 4 pm on Friday, November 12 , 2021, with a light reception to immediately follow in the auditorium. Service will be livestreamed. Please call the church at 412-731-0122 close to the time for the link. Family suggests donations in Doriss honor be directed to the Pittsburgh New Church School Student Scholarship Fund where her heart resided in her last years.
To order memorial trees or send flowers to the family in memory of Doris (Odhner) Delaney, please visit our flower store.