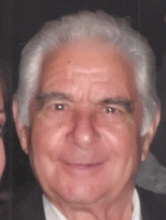 Mr. Malta was born on January 6, 1929. He married his beloved wife Maria on February 4, 1956. They immigrated to the United States from Maierato, Italy in 1968 for a better life for their family. He worked hard as a laborer until his retirement in 1991, when he began working part time as a landscaper. He enjoyed spending time with his family, especially his grandchildren and spending time in his garden.

Celebrate Mr. Maltas life with his family on Saturday and Sunday from 2-4 PM and 6-8 PM at Perman Funeral Home and Cremation Services, Inc., 923 Saxonburg Blvd. at Rte. 8. Mass of Christian Burial at St. Raphael Church, Morningside on Monday at 9:30 AM. Entombment at Mt. Royal Mausoleum.
To order memorial trees or send flowers to the family in memory of Bruno Malta, please visit our flower store.