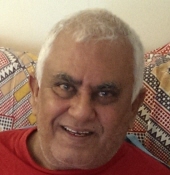 Of Scott Twp., on Monday, May 9, 2016, Mr. Desai was the beloved husband of Devilaben Desai; father of Amishaben Mehta (Rajeshbhai), Kalpesh Desai, Hitesh Desai (Hiral), and the late Jayshree Naik; brother of Ila Desai (Jitubhai) and the late Madhuben Desai (Ishwarlal); also survived by 9 grandchildren and 1 great-grandchild.
Celebrate Mr. Desais life with his family on Wednesday from 10-11:15 AM at Perman Funeral Home and Cremation Services, Inc., 923 Saxonburg Blvd. at Rt. 8, Shaler Twp.
To order memorial trees or send flowers to the family in memory of Bhikhubhai Desai, please visit our flower store.