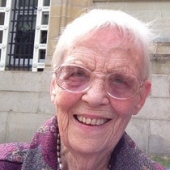 Celebrate Mrs. Mertz’s life with her family on Friday from 2-4 and 6-8 PM at Perman Funeral Home and Cremation Services, Inc., 923 Saxonburg Blvd. at Rt. 8, Shaler Twp. Funeral Mass at St. Joseph Parish, O’Hara Twp. on Saturday at 10 AM. Her family respectfully suggests donations be made to CureJM, 836 Lynwood Dr., Encinitas, CA 92024 or www.curejm.org in honor of a grandchild with Juvenile Myositis.
To order memorial trees or send flowers to the family in memory of Alice Marie (Klingensmith) Mertz, please visit our flower store.