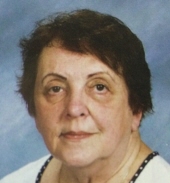 On Monday, July 10, 2017, Ms. Smolkovich of Etna was born on August 12, 1933, the daughter of the late John P. and Justine Bukevic Smolkovich; sister of the late Mary Bartuccio, Catherine Kurtiak, Sr. Regina "Helen" Smolkovich, Mildred J. Smolkovich. She is survived by adopted daughter, Nevenka Smolkovich DePasquale (John) and her three children; aunt of Justine Bartuccio Brown (William), Carmen J. Bartuccio (Robin Roscher), John Kurtiak, Cathy Kurtiak, Justine Bollinger (Don), Anna Kurtiak, Raymond Kurtiak (Debbie); special friend of Karen Ulrich; and numerous great nieces and nephews.
Ms. Smolkovich graduated from Shaler High School, class of 1951, and continued to meet with her classmates until three years ago. She was the recipient of the Nationality Room Scholarship in 1954. This allowed her to opportunity to visit Yugoslavia, the birthplace of her parents. The trip began a lifetime love of learning languages and traveling to many parts of the world. She graduated from the University of Pittsburgh in 1955 with a degree in business education. She had worked her way through Pitt by playing the accordion. Ms. Smolkovich continued her graduate studies of Spanish, German, Serbs-Croatian in Mexico and Yugoslavia. Upon completion of her studies, she began her teaching career at Leetsdale School District teaching business. From there, she became a teacher at Shaler High School, where she taught Spanish, German, and Serbo-Croatian for 48 years.
She was a member of many organizations. For education, she was a member of NEA, PSEA, PSMLA (State officer), and was teacher of the year. She also belonged to SAEA, Delta Kappa Gamma, University of Pittsburgh Alumni Association, Nationality Room-Yugoslav Room Committee (Past Chairwoman), Pittsburgh Council for International Visitors, KSKJ, and the Croatian Fraternal Union.
Ms. Smolkovich sang with St. Pauls Cathedral Choir for over 30 years. She traveled to Europe yearly to visit family and the many friends that she made all over the world. She loved ethnic music of Slovenia, Croatia, and Serbia. She was a marvelous cook and loved to entertain guests in her home. Her home was always open to visitors from other countries who were staying in Pittsburgh for work or study for an extended period of time. She spent much time in her garden; she loved to make compost! She believed in lifelong learning. Ms. Smolkovich was a lifelong member of All Saints Parish in Etna.
Special thanks to the staff of Concordia of Cranberry and Good Samaritan Hospice, Cabot.
Celebrate Ms. Smolkovichs life with her family on Thursday from 2-4 PM 6-8 PM at Perman Funeral Home and Cremation Services, Inc., 923 Saxonburg Blvd. at Rte. 8, Shaler Twp. Mass of Christian Burial at All Saints Church, Etna on Friday at 10 AM. The family respectfully requests donations be made to the Society to Preserve the Millvale Murals of Maxo Vanka, 24 Maryland Ave., Pittsburgh, PA 15209, or University of Pittsburgh Nationality Rooms, Yugoslav Committee, http://www.nationalityrooms.pitt.edu/node/560
Charitable donations may be made to:
The Society to Preserve the Millvale Murals of Maxo Vanka,
24 Maryland Avenue, Pittsburgh PA 15209
Web: http://vankamurals.org/
To order memorial trees or send flowers to the family in memory of Alice D. Smolkovich, please visit our flower store.