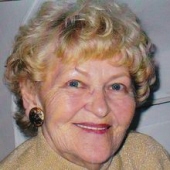 Services and interment were private. Arrangements by Perman Funeral Home and Cremation Services, Inc., 923 Saxonburg Blvd at Rt. 8, Shaler TwpA Memorial Mass will be held at All Saints Church, Etna at a later date. Family respectfully suggests donations be made to All Saints Stained Glass Fund, 19 Wilson St, Pittsburgh PA 15223.
To order memorial trees or send flowers to the family in memory of A. Patricia Patsy Kozlowski, please visit our flower store.